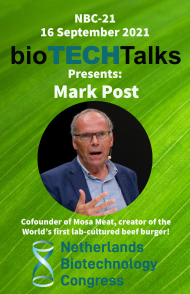 Mark Post is a Dutch pharmacologist and professor of vascular physiology at Maastricht University. On 5 August 2013, he and his team were the first in the world to give a practical demonstration of cultured meat.

During NBC-21, Mark Post will give us a scientific look into the future of cultured meat production with his talk entitled: Medical Biotechnology to produce Food.